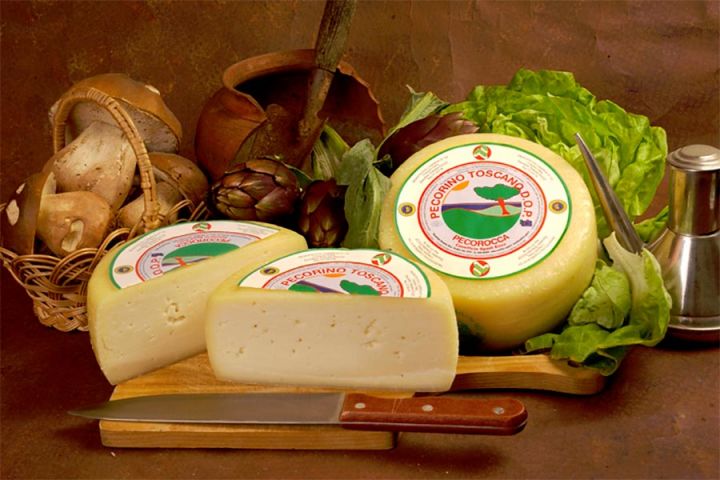 The milk must be curdled at a temperature of between 33 and 38°C, with the addition of calf rennet so that it curdles within 20-25 minutes.
The milk can be raw or heat treated until pasteurised and may be inoculated with native natural or selected starter cultures.
After breaking, if the curd is to be used to produce Pecorino Toscano PDO Stagionato, the curd is heated to a temperature of 40-42°C for 10-15 minutes.
The curd is then placed in molds to purge the whey. Purging is done by manual pressing or by stufatura (a process using heat and steam).
Salting takes place in brine, eight hours for the soft cheese and 12-14 hours for the semi-hard cheese, or with the direct addition of salt; semi-hard cheeses are ripened for a longer period of time. Pecorino Toscano PDO may be treated externally with an anti-mould agent and must be ripened in appropriate cells at a temperature of 5-12°C, for a period of at least 20 days for the soft cheese and no less than four months for the semi-hard cheese.

Pecorino Toscano PDO has a cylindrical shape, flat surfaces, with a slightly convex edge and a weight varying between 0.75 to 3.50 kg.
It is characterised by a yellow rind, the tone of which depends on the treatments carried out.
The cheese is compact, soft on cutting and white in colour, slightly straw coloured for the Fresh typology, tender on cutting and with the possible presence of minute eyes, which are not evenly distributed in the Mature cheese.
It has a fragrant and pronounced flavour, depending on the production methods.

Pecorino Toscano PDO is best conserved in a cool, dry place. It is preferable not to put it in the fridge, but if so, it should be placed in the least cold compartment and wrapped in a slightly damp cotton cloth.
This product can be used as a table cheese or for grating, depending on how mature it is.
It is excellent for grating on Tuscan Ribollita soup, pasta dishes, or to add flavour to meat-based dishes. Fresh or mature, it pairs well with fresh seasonal vegetables or fruit, jam and honey. Pecorino Toscano PDO goes well with white or red wines depending on its age.

Pecorino Toscano PDO is characterised by its sweet flavour, which is never sapid or piquant.
This particular attribute is given to the use of calf rennet in the processing method and the briefer salting process compared to other varieties of pecorino cheese.

It is said that the breeding of sheep in Tuscany dates back as far as the Etruscan period, but the first historical references to Pecorino Toscano PDO are from the Roman period.
In the XV century it was known by the name of cacio marzolino (March cheese) because production began in March and continued throughout the Spring.
This cheese has been produced according to specific guidelines since the XIX century.

The production area of Pecorino Toscano PDO is within the Tuscany region and in some municipal areas of Viterbo and Perugia, respectively in the regions of Lazio and Umbria.