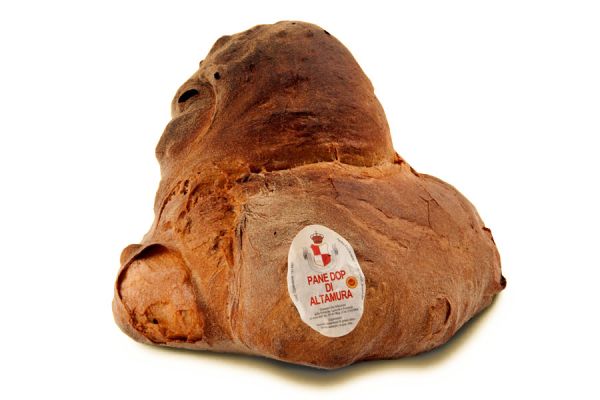 Pane di Altamura PDO is bread made from a dough of ground Durum wheat, Mother yeast or sour dough, marine salt and water.

The Mother yeast is renewed at least three times with the addition of water and Durum wheat semolina, with the aim of increasing the fermented mass. The ingredients are mixed in a mixer for 20 minutes. The dough is covered with a thick cotton cloth in order to ensure that it leavens at an even temperature; it is then left to rest for at least 90 minutes. The dough is weighed and then shaped by hand in two stages, alternated with two resting periods of 30 and 15 minutes. The forms are turned upside down and then put into a wood or gas oven at a temperature of 250°C. For the first 15 minutes the oven is left open, after which the door is closed and the bread is left to cook for a further 45 minutes. At the end of the cooking time, the door is opened and the bread is left for five minutes before being removed, allowing the steam to exit and the crust to become crispy.

Pane di Altamura PDO has either a traditional Accavallata shape (overlapped) with crosses on the sides (locally known as skuanete), or Cappello di Prete (priest’s hat - locally known as a cappidd d’prevte), which is without the crosses; they are made in loaves weighing at least 500 g. The bread is soft, straw yellow in colour and has uniform air pockets. The aroma is characteristic.

Pane di Altamura PDO can be kept for a few days in a dry place. It is excellent eaten sliced with extra virgin olive oil and salt, at times with the addition of tomatoes. Perfect as an appetizer or in any other type of dish, there are many traditional recipes based on this bread, like waffles with baby tomatoes, onions, potatoes and olives or Zuppa Povera, made with cubes of fresh toasted bread, tomatoes, oregano, basil, fresh garlic, salt and extra virgin olive oil.

The product is marketed as Pane di Altamura PDO in the typologies Accavallata and Cappello di Prete. It is sold fresh year-round in loaves weighing no less than 0.5 kg. The final product is packaged in perforated heat-shrink wrapping with the distinctive and easily recognisable mark of Pane di Altamura PDO, or unwrapped.

Pane di Altamura PDO is considered to have unique quality because the Durum wheat corresponds by at least 80% to the Appuro, Arcangelo, Duilio and Simeto varieties produced in the area, in an environment with specific geographical-environmental factors. Also, the water used must meet the potabilty and certification requirements.

There are numerous testimonies to the origins and reputation of this distinctive bread: Pliny, for example, defines it as being “the best bread in the world”. In the traditional Accavallata shape, Pane di Altamura PDO has ancient local origins; it was large in size and the dough was mainly prepared at home. The breads were then cooked in public ovens, marked with the initials of the head of the family. The city of Altamura referred to bread making in its Municipal Statutes of 1527, in which there are documents relative to the “oven duty”. We also know that in the Altamura area at the beginning of the 1600s, there were already 26 milling facilities, confirming the great diffusion of this product and how it was born into an agri-pastoral society.