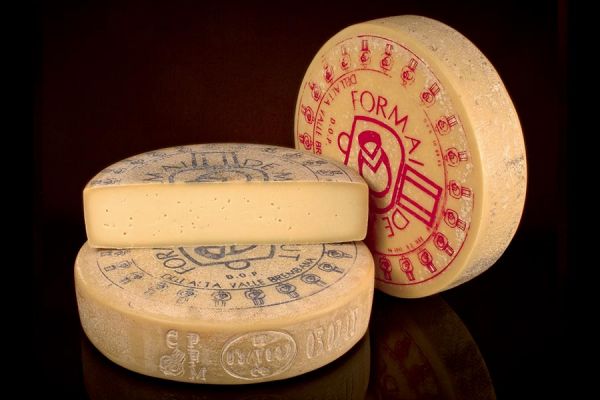 Formai de Mut dell’Alta Valle Brembana PDO is a semi-cooked cheese, produced exclusively with whole cow’s milk obtained from one or two daily milkings.
It is sold in two typologies: Prodotto a fondovalle (produced in the valley) and Prodotto in alpeggio (produced in the mountain pastures).

The cows are fed with grasses or dry hay from the production area. The milk curdles at a temperature of between 35 and 37°C, with rennet folded in so as to obtain the curd within 30 minutes.
The first breaking of the curd is followed by semi-cooking the mass at temperatures of up to 45-47°C. Once removed from heat, the mass is agitated and then pressed in order to stimulate the purging of the whey.
It is put in special filtering clothes called pate and then placed in molds known as fassere. The forms are then dry salted or salted in brine; this must be repeated every other day for 8-12 days.
The ripening period lasts for a minimum of 45 days.

Formai de Mut dell’Alta Valle Brembana PDO has a compact, thin rind that ranges from straw yellow to grey in colour, depending on the length of the ripening process.
The semi-cooked cheese is ivory to straw yellow in colour and has a compact and elastic structure with scattered eyes. The flavour is delicate and fragrant, slightly salty and not spicy, with a characteristic aroma.

Formai de Mut dell’Alta Valle Brembana PDO should be conserved in a cool place.
If put in the fridge, it is best to seal it in a plastic or glass container, in order to prevent alterations in the organoleptic characteristics and flavour of the product.
It is an excellent table cheese when ripened for more than six months. It can also be used as an ingredient in the preparation of traditional dishes from its area of origin, for example,
Bergamasca polenta. When fresh, it pairs well with white wines, and with reds if mature.

The product is marketed as Formai de Mut dell’Alta Valle Brembana PDO, with a Blue mark when produced in the highlands between June and September (alpine cheese),
and a Red mark when produced year-round in the valley. It is sold year-round, whole, in large pieces, or in pre-packed slices.

Formai de Mut dell’Alta Valle Brembana PDO is produced and ripened within the Orobie Occidentali Bergamasche Park, an alpine area of noteworthy relevance in regards to the environmental heritage.
The climate is cool, with an abundance of water and rich, aromatic pastures, making this an ideal environment for the production and processing of milk,
as well as contributing to the specific organoleptic characteristics of the cheese; the product is enriched by distinctive fragrances and aromas, especially the highland summer cheeses.

The production of this cheese most likely began some centuries ago, but it has only seen an important development since the Second World War,
with the establishment of a small dairy that worked for only five months of the year (from January to May); in 1954 this dairy became the Latteria Sociale Valtorta.
At the end of the 1980s, the dairy began producing Formai de Mut year-round. The etymology of the name Formai de Mut dell’Alta Valle Brembana PDO derives from the Val Brembana dialect word mut, meaning “mountain pasture”.
Already by the XX century, the expression “mountain cheese” indicated the entire dairy produce of the High Valley area, referring to cheese produced in both the highlands and the valley.

The production area of Formai de Mut dell’Alta Valle Brembana PDO is within 21 municipal areas in the high Brembana Valley, in the Province of Bergamo, in the Lombardy region.