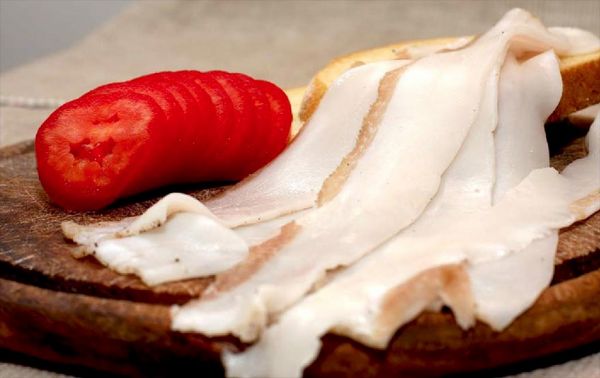 Lardo di Colonnata PGI is a charcuterie product obtained from the fat of selected pork topside, which is salted and cured in marble bowls.

Processing is seasonal and takes place between September and May.
According to the traditional method, curing takes place in bowls carved out of marble blocks originating from the Canaloni marble basin in Colonnata (Massa Carrara).
Each bowl is rubbed inside with garlic and then filled with alternate layers of lard and a mixture of natural sea salt, black ground pepper, fresh rosemary and freshly peeled and chopped garlic; other spices may also be added. The recipients are then closed with a slab of marble or another suitable material, and the ingredients are left to rest for at least six months, in slightly aerated rooms in which humidity depends only on natural factors. During this stage, the consistency of the so-called “pickling brine”, the liquid released from the lard after contact with salt, must be checked.

Lardo di Colonnata PGI generally has a rectangular shape with a thickness of approximately 3 cm.
The lower part is covered by pig rind, while the upper part is covered with salt, herbs and spices.
There can be a streak of lean meat inside and its consistency is uniform and tender. It is white and slightly pinkish or brown in colour.
It is fragrant and has a delicate and fresh flavour, enriched with the aromatic herbs and spices that cover it.

Lardo di Colonnata PGI should be kept in a cellar or cool place; it can also be kept in the fridge.
After cutting, it is advisable to fold the strip of the leftover pigskin onto the body of the lard and to leave the product covered with its salt; it should then be wrapped in a slightly dampened cloth. Ideally, Lardo di Colonnata PGI should be served “au naturel” and thinly sliced, with slightly toasted bread or with unusual combinations, such as shellfish. It is perfect to pair with well-structured wines such as Vernaccia di San Gimignano PDO.

The product is marketed as Lardo di Colonnata PGI. It is sold in pieces – vacuum-packed in either plastic or other suitable material – sliced or minced and suitably packaged.

The production area of Lardo di Colonnata PGI is characterised by a high percentage of humidity, mild summer temperatures and limited daily and yearly temperature ranges, which together generate an exclusive micro-climate that is particularly suitable for the processing and natural conservation of the product.

The production area of Lardo di Colonnata PGI is within the entire territory of the district of Colonnata in the Municipality of Carrara, in the Province of Massa Carrara, in the Tuscany region. The pigs used for production must be born and reared in the following regions: Tuscany, Veneto, Emilia-Romagna, Friuli Venezia Giulia, Lombardy, Piedmont, Molise, Umbria, Marche and Lazio.