Cheese of Fossa of Sogliano P.D.O. 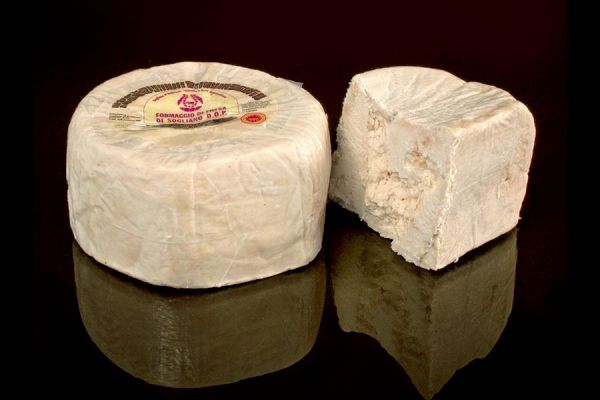 Formaggio di Fossa di Sogliano PDO, is a hard or semi-hard cheese produced with whole cow’s milk or sheep’s milk, or with a mix of the two (80% cow and at least 20% sheep).
The animals must originate from farms within the production area and must belong to the following breeds: Frisona Italiana, Bruna Alpina,
Pezzata Rossa cattle breeds and their crossbreeds; Sarda, Comisana, Massese, Vissana, Cornella Bianca, Fabrianese delle Langhe, Pinzirita sheep breeds and their crossbreeds.

The milk, which is obtained from two daily milkings, can be used both raw and pasteurised; if raw, it must be processed within 48 hours of the first milking.
Curdling takes place with the addition of natural rennet, at a temperature of 30-38°C. After the curd has broken and the cheese mass has been put in molds,
it is salted and then pre-ripened for a period of between 60 and 240 days. The cheese forms are then inserted into natural cotton bags and buried in characteristic sandstone pits.
Before use, the pits are sterilized with fire and smoke, by burning small quantities of straw, and a raised platform of untreated wooden planks is placed at the bottom.
The walls of the pit are lined with a layer of straw supported by vertical reed fencing. Once the forms have been introduced,
they are covered with straw and the pits are covered with a wooden cover, which is sealed with clay or lime sandstone mortar.
The cheeses are removed from the pits after 80-100 days.

Formaggio di Fossa di Sogliano PDO has an ivory white to straw yellow colour.
It has an uneven shape, is free from rind or with a small amount, and has a weight of 500 to 1900 g.
The cheese has a semi-hard and easily friable consistency which is amber-white or straw coloured.
It has a very strong aroma, with hints of sulphur, mould and truffles. The Pecorino cheese (from sheep’s milk) has an aromatic taste, with a good, strong and slightly piquant flavour.
The Vaccino cheese (from cow’s milk) is more delicate, slightly sour and salty with a bitter aftertaste. The Misto cheese (from both milks), has a well-balanced taste with bittery hints.

Formaggio di Fossa di Sogliano PDO must be stored in the fridge at a temperature of between 4 and 8°C.
It can be eaten fresh, although it should be kept at a room temperature for a few minutes before consumption.
In the local cuisine of Emilia-Romagna and The Marches, this cheese is used as an ingredient to prepare many recipes.

The product is marketed as Formaggio di Fossa di Sogliano PDO Pecorino, Vaccino and Misto.
Depending on the ripening period, the cheese can also be distinguished as “spring-like” (PRM) and “summer-like” (EST).
It is sold year-round, whole in its ripening bags or in pieces, vacuum-packed, in sealed food trays or wrapped in food paper.

The practise of ripening cheeses in underground pits dates back to the Middle Ages and was used to protect food from the raids of occasional invaders.
The first documents on the techniques of burying cheese in pits date back to the XIV century, and are conserved in the Malatesta’s family archives, the land owners.
The Formaggio di Fossa di Sogliano was nominated in two inventories of 1497 and 1498.

The production area of Formaggio di Fossa di Sogliano PDO is within the provinces of Forlì- Cesena, Rimini, Ravenna and part of the Province of Bologna, in the Emilia
- Romagna region: within the provincial districts of Ancona, Macerata, Pesaro-Urbino and Ascoli Piceno in The Marches region.