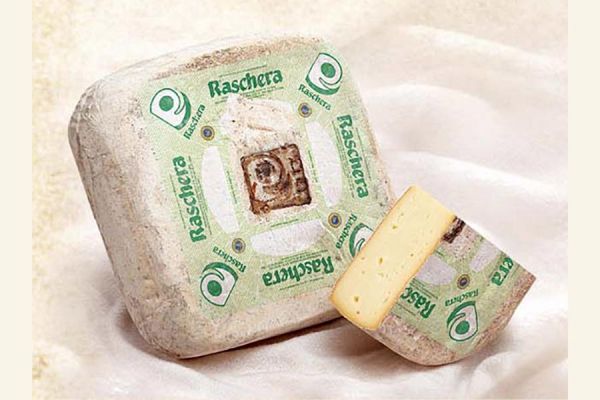 Raschera PDO is a pressed and compact medium fat cheese produced with cows’ milk, with the possible addition of small amounts of sheep or goat’s milk.

The milk must be taken from two consecutive milkings and is used raw or sterilised. Curdling occurs at a temperature of 30-37°C, in a period of between 20 and 60 minutes, with the addition of animal rennet.
The curd is broken until the grains are the size of corn kernels and hazelnuts. This is followed by extraction, draining and shaping. The forms are then dry salted or salted in brine.
The minimum ripening period is 30 days for Raschera PDO produced with sterilised milk, and 60 days for that produced with raw milk.
In the mountains, shaping is carried out with the cloth that was used first to extract the curd and then for the first manual pressing of the cheese.
After a few minutes, the cloth is opened and the curd is kneaded again, replaced in the cloth and put into molds called fascere.
The molds are covered with wooden planks loaded with rocks for at least five hours, after which time the forms are removed from the molds and the cloth; the forms are put back in the molds and left for a further five hours.

Raschera PDO is produced in two shapes: round with flat surfaces, a diameter of 30-40 cm and a weight of between 5 and 8 kg;
quadrangular with flat surfaces, a side length of 28 to 40 cm and a weight of between 6 and 9 kg. The rind is thin and pinkish-grey in colour,
at times with hints of yellow, and is elastic, smooth and even. The cheese is white or ivory in colour, consistent, elastic and has tiny sparse eyes spread irregularly throughout.
The flavour is delicate, aromatic and moderately piquant, or salty if mature. Raschera PDO d’Alpeggio, produced with milk obtained from animals grazed on mountain pastures,
has an intense yellow colour with an aroma of aromatic herbs and summer flowers due to the fresh forage; the flavour is full, complex and persistent.

Raschera PDO should be kept in a cool place or in the least cold compartment of the fridge, taking care to keep it wrapped in its original
packaging or in aluminum foil and sealed in glass or plastic containers. It is a great cheese to eat on its own and can also be used as an
ingredient in the preparation of risotto and fillings, with fresh vegetables and in mixed salads.
It is usually paired with full-bodied red wines.

The product is marketed as: Raschera PDO (green label), with the possible addition of the wording “d’Alpeggio” (yellow label),
if it is produced and matured at an altitude of more than 900 metres above sea level and in one of nine specific municipal areas.
It is sold year-round, whole, in large pieces, and in pre-packed slices. The form must bear the fire-branded product logo and the
label must display the product logo and designation.

At the termination of the salting process, Raschera PDO is cleansed of excess salt and left to ripen in special environments or characteristic natural “saddles”; in Alpine areas they are placed on wooden planks.

The origins of Raschera PDO date back to at least to the XV century; a rental contract was discovered in the Pamparato town hall archives,
in which the local squire obliged the shepherds to “graze their cows on the field of Raschera”, so that they could pay the rent with several
forms of “that good cheese that you make up there”. Following a crisis in the 1970s, the risk of this artisan cheese production
disappearing forever led to the establishment of the Raschera and Brus Association.

The production area of Raschera PDO is within the territory of the Province of Cuneo, in the Piedmont region.